Wow! Two wake up calls for the planet Earth in one day! Maybe it’s about time that the people of planet Earth realize that they are inside the pinball machine that makes up our Solar System. Sooner or later that ball is going to hit us head on. Today we were lucky – twice! 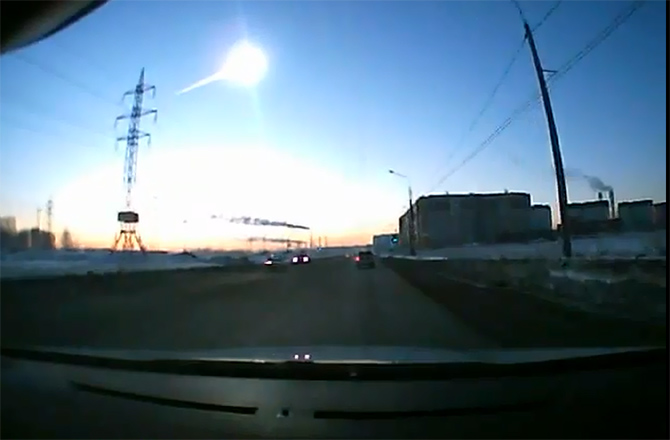 The spectacular meteor that streaked across Russia’s sky Friday morning has been estimated to be about 56 feet (17 meters) across, weighing in at more than 7000 metric tons and moving at speed around 40,000 mph (64, 373 km/h). It exploded about 9-12 miles (15-20 km) above the surface of the Earth with an equivalent of 500 kilotons of TNT—30 times the energy of the Hiroshima atomic bomb.  The consequent shockwave shattered windows and damage buildings in and around the Russian city, Chelyabinsk, resulting in over 1000 injuries.

This meteor was not related to the flyby later in the day of asteroid 2012 DA14. This asteroid skimmed by the Earth at a distance a little over 17,000 miles (27,400 km). Friday, February 15, 2013 could have turned out a lot different if either of these cosmic messengers had a slight change in course, which in the case of the Russian asteroid, could have detonated lower and over a more populated area or for 2012 DA14, a direct hit instead of a near miss.

The Tunguska explosion occurred in the air above Siberia at a height of about 28,000 feet

(8500 meters) and generated the equivalent energy of about 1000 Hiroshima atomic bombs. The result was over 800 square miles of forest destroyed and a shock waves that

were recorded as far as western Europe and registered a magnitude 5 earthquake. As of today, no crater has been found to mark an impact of the remnants of the asteroid, leading some to think it might have been piece of a comet that entered Earth’s atmosphere that day, which is made mostly of ice. Contrasting Tunguska is the nickel-iron meteor that did leave a crater in what is now Arizona. About 50,000 years ago this meteor entered the atmosphere at a speed of about 27,000 mph (43,000 km/hr) and fragmented to some degree due to the stresses associated with entry into the atmosphere, but the bulk of it hit the Earth creating a crater that is 4000 feet (1200 meters) in diameter and 570 feet (174 meters) deep. The explosive energy released from the impact has been estimated to be as high as 200 times that of the bomb dropped on Hiroshima. Impact effects at Meteor Crater – Image courtesy of the Space Imagery Center and/or David A. Kring

We see two very different effects from two similarly sized asteroids.  But, it is the different composition that makes the difference.  The high density nickel-iron meteor survives the descent to the surface, while the less dense, ice-rich meteor fragments due to the high stresses experienced in its passage through thicker layers of the atmosphere. The temperatures experienced by these fragments can reach 45,000 °F (25,000 °C) causing the massive fireball and resulting shockwave and destruction.

We don’t, by any stretch of the imagination have knowledge of every asteroid in the Solar System that poses a potential threat to Earth.  The more we look the more we see, and with regard to near Earth asteroids (NEA), the sooner we find them the better.  It is possibly the only natural disaster we may be able to avert, given enough time.

Damage by Impact — the Case at Meteor Crater, Arizona