When we look at the night sky ablaze with stars it is very easy to interpret what we see as a two dimensional image. It’s difficult to associate depth to what we see, because all we see are points of light of varying brightness. We do equate distance with brightness, but overall it’s hard to get a real sense of depth in the night sky, partly because distance can be camouflaged by an object’s brightness.

The Moon and planets give us a little bit more of a visual clue, being bigger and brighter, but that may be more because we know they are closer and not because we perceive a distinct difference in distance. It’s easy to see why the ancient astronomers constructed crystalline shells to transport the stars, planets, Sun and Moon around the sky. The stars were the easiest, as they slowly shifted with the seasons and never changed position, but the planets, Moon and Sun (not to mention comets!) were a different story, and their observed behavior led to very complex solutions to explain their motions. The constellation of Orion (Wikimedia Commons)

The constellation of Orion, the great hunter, floats across our night sky as the seasons change, just as it did for the ancients. It is a good example of a two dimensional construct that exists in a very three dimensional form—the stars and nebula that we see in Orion are not all at the same distance from Earth. If we could take a ride on a starship and gain a new perspective on this mighty constellation we would see a very different arrangement of stars. Check out the illustration below. 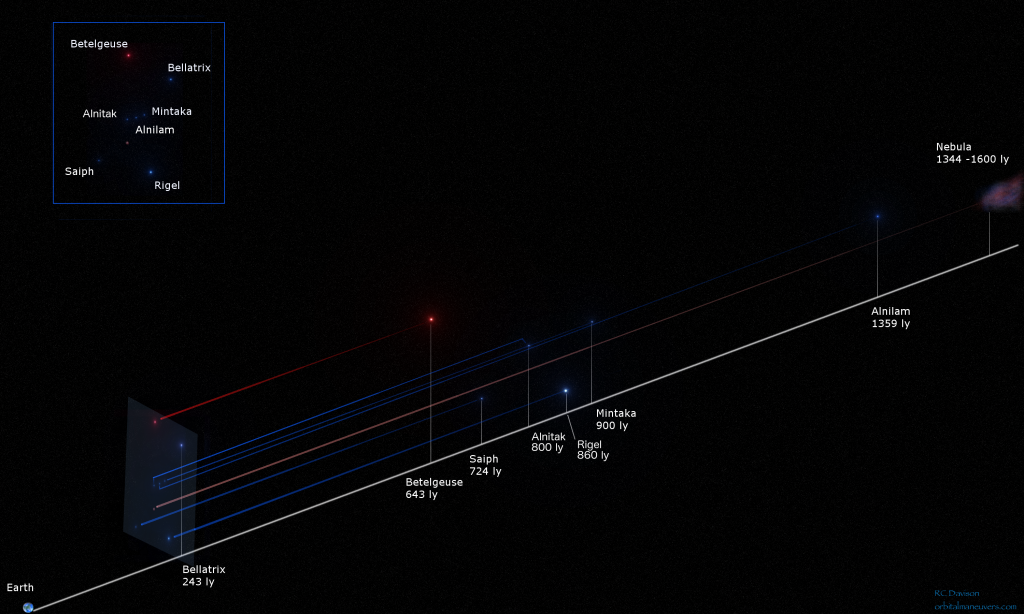 The depth of the Orion constellation. (Click for a larger image.)

This new perspective allows us to see that the star in Orion closest to Earth is Bellatrix, a blue-white supergiant, at 243 light years (ly).  The next closest star is Betelgeuse, the amazingly large red supergiant star at 643 ly. In the not too distant future we will have a ringside seat to a supernova explosion, as Betelgeuse will end its life in one of the most spectacular events in the cosmos.

The next closest star to Earth is Saiph, a blue supergiant that anchors the right leg of Orion. Saiph is followed “closely” by the brightest star in the constellation, Rigel, a blue supergiant about 17 times bigger than our Sun and part of a binary system. Although Saiph and Rigel are both blue supergiants, and Saiph is closer to us, it is dimmer than Rigel. The reason for this is that Saiph is hotter than Rigel and it radiates more light in the ultraviolet end of the spectrum, which we can’t see and therefore appears dimmer in visual part of the spectrum we are sensitive to.

The stars that make up the belt of Orion, Alnitak, Alnilam and Mintaka are all very similar second-magnitude stars, again blue-white supergiants. Alnitak has two smaller companions, making it a triple star system. Alnilam, the most distant of all the stars in the constellation at 1344 ly, makes up for that distance by being the brightest star in the belt. Mintaka is the right-most star in the belt and it is a binary star system with a small companion star.

The stars that make up the constellation of Orion, aside from Betelgeuse, are all hot, young supergiant stars that will end their lives in a supernova. Betelgeuse is just an example of what’s to come, having already entered its red giant stage. They all formed from the same molecular cloud, tens to hundreds of millions of years ago.

There is one more element to Orion that we can easily see with the naked eye, and that is the Orion Nebula, just below Orion’s belt. This nebula is a nest for new stars to form and there are many images on the web that show this in great detail. The nebula is not “within” the constellation as we might imagine it to be but is further from us, with published distances varying from 1300 – 1600 ly. The video below gives a very nice 3D fly through the Orion Nebula.

The Universe is boundless, and we, unfortunately, are at the mercy of our limited senses when we gaze into it. Thankfully we’ve been able to develop the technology that is just beginning to allow us to see the wonders it holds.  Keep looking up and remember, there’s more there than meets the eye…