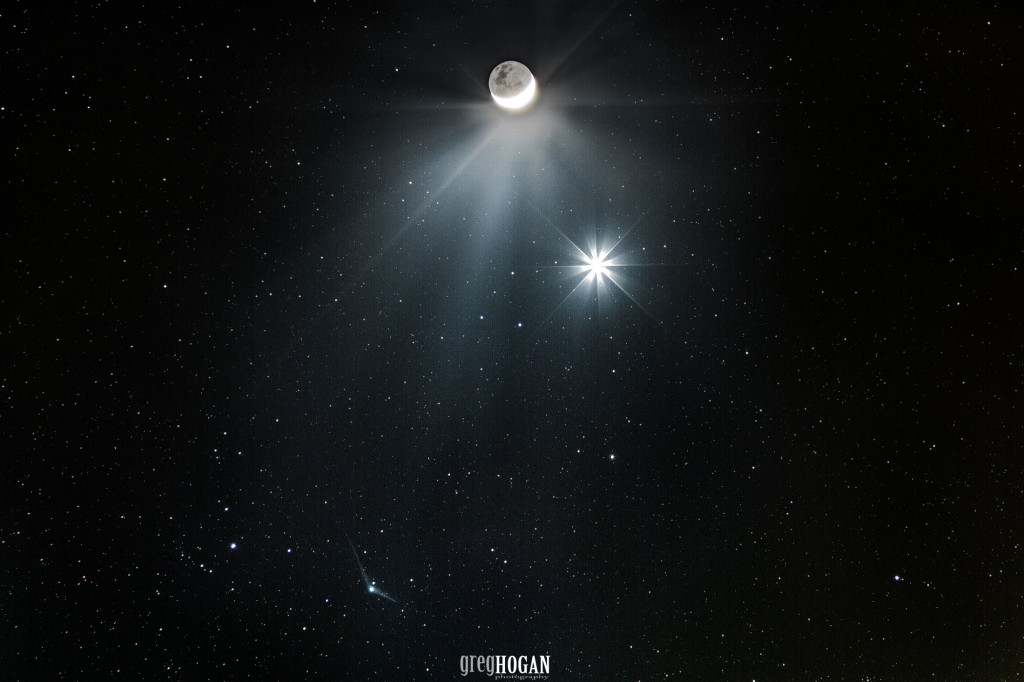 Sometimes a picture captures just the right moment in space and time and shows us more than the obvious when we take a closer look. The great picture above, taken by Greg Hogan shows the comet Catalina visiting the morning sky with the crescent Moon and blazingly bright planet Venus. Focusing in on the wispy comet just left of center at the bottom of the image, one will notice that it looks more like a clock captured at five minutes before four. This image shows very nicely the two distinct tails that a comet can form as it dives into the inner solar system to swing around the Sun and back out again. The two tails accompanying a comet are distinctly different: one being a dust tail and the other an ion tail.

The coma or cloud around the head or nucleus of a comet, along with its tails start to form out around the orbit of Mars as the comet warms with the increasing amount of energy it’s receiving from the Sun. The comet is composed of ice (frozen gases, and water), dust, dirt and rock and is sometimes referred to as a “dirty snowball”. As it moves closer to the Sun it continues to heat up, and the ices begin to sublime or convert directly to a gas without going through a liquid phase. This release of gas carries dust particles with it, which destabilizes the comet’s surface allowing larger particles to be released, all of which contributes to the coma and tails. Intense jets of gas, can push even more material away from the comet. It is this debris trail that becomes the source for an annual meteor shower if and when the Earth crosses the path of the comet, such as the Perseids we see in the middle of August every year, which is from Comet Swift-Tuttle.

The dust tail reflects the sunlight and appears white in color similar to the coma. The dust is launched from the comet’s surface and slowly moves away from its host. These particles will begin orbiting the Sun on their own trajectory as they escape the gravitational influence of the comet. They are also pushed away from the comet by the radiation pressure from the Sun. This radiation pressure is due to the transfer of momentum from a light particle (photon) to the dust particle when they collide. This is exactly how a solar sail works. The dust tail will flow behind the comet and as the comet rounds the Sun the tail can become curved as the particles of dust are pushed by the light, as can be seen in the image below of comet McNaught. 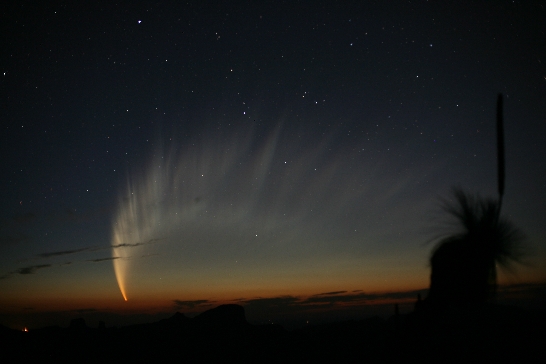 The gas particles that are released by the comet will form the ion tail It is typically bluish/greenish in color and occurs because these gas particles liberated from the comet become “ionized” or charged by the high energy ultraviolet light emitted by the Sun. Once the atoms and molecules of gas become charged they will now be influenced by the magnetic field associated with the solar wind that comes from the Sun. The solar wind is a collection of high energy particles that the Sun radiates and entrained with this stream of particles is a magnetic field pointing away from the Sun. So the ion tail will point directly away from the Sun while the dust tail indicates the path the comet has taken. The ion tail can exhibit knots and twists due to the magnetic field as can be seen below. 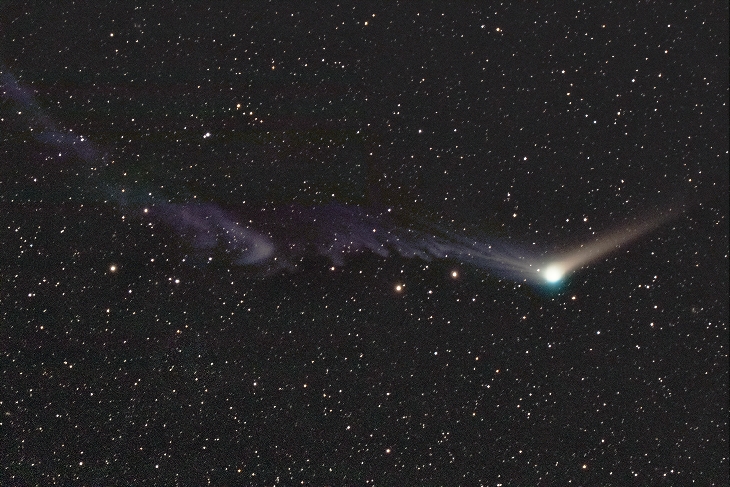 The  amazing image below shows comet Encke being buffeted by a coronal mass ejection (CME) from the Sun. The comet’s tail detaches as the mass of solar particles sweeps by and then quickly reforms. This is believed to be caused by the magnetic field retained in the CME interacting with the ion tail’s field. The video is from NASA’s STEREO solar mission.

Comet Encke’s interaction with a CME

If you look in Greg’s picture at the Moon you will see that it is illuminated on lower right hand side by the Sun, which is out of frame in the lower right. Now look closely at comet Catalina and at the “minute hand” of the clock – the ion tail; it’s pointing directly away from the Sun, while the “hour hand” – the dust tail is pointing more towards the Sun indicating that the comet is moving away from the Sun and heading back out of the solar system.  Catalina passed closest to the Sun on November 15, 2015 and will be closest to Earth on January 12, 2016.

Comet Catalina will make only a one-time appearance, as it has gained enough energy on its dive through the inner solar system that it will be jettisoned into interstellar space, never to return. On its journey it will pass through two large reservoirs of comets and other leftover debris from the early solar system that orbit our star, the Kuiper Belt and the Oort Cloud.

Comets originating in the Kuiper Belt, about 30 – 55 times the distance the Earth is from the Sun are known as short period comets, and have periods less than 200 years. Halley’s comet is a well known short period comet, having a period of about 76 years. Note that the Kuiper belt starts at the orbit of the planet Neptune. (Yes, Pluto is a Kuiper Belt object!) (The average Earth-Sun distance is 93 million miles or 150 million km and has been established as a standard unit of distance in astronomy known as an Astronomical Unit or “AU”.)

Long period comets originate from a much more distant region of the solar system, the Oort Cloud. This cloud of frozen debris extends from 5,000 AU to 100,000 AU. Way out there! These comets can have periods as long as 30 million years to complete an orbit around the Sun. Comet Catalina most likely originated from here.

Catch a glimpse of comet Catalina if you can in January, as it will be on the edge of naked-eye visibility, so under the right conditions you won’t need binoculars or a telescope, but they will make for much better viewing. Comets are relics of the early solar system and the more we can study them, the more we learn about how our place in space has formed. 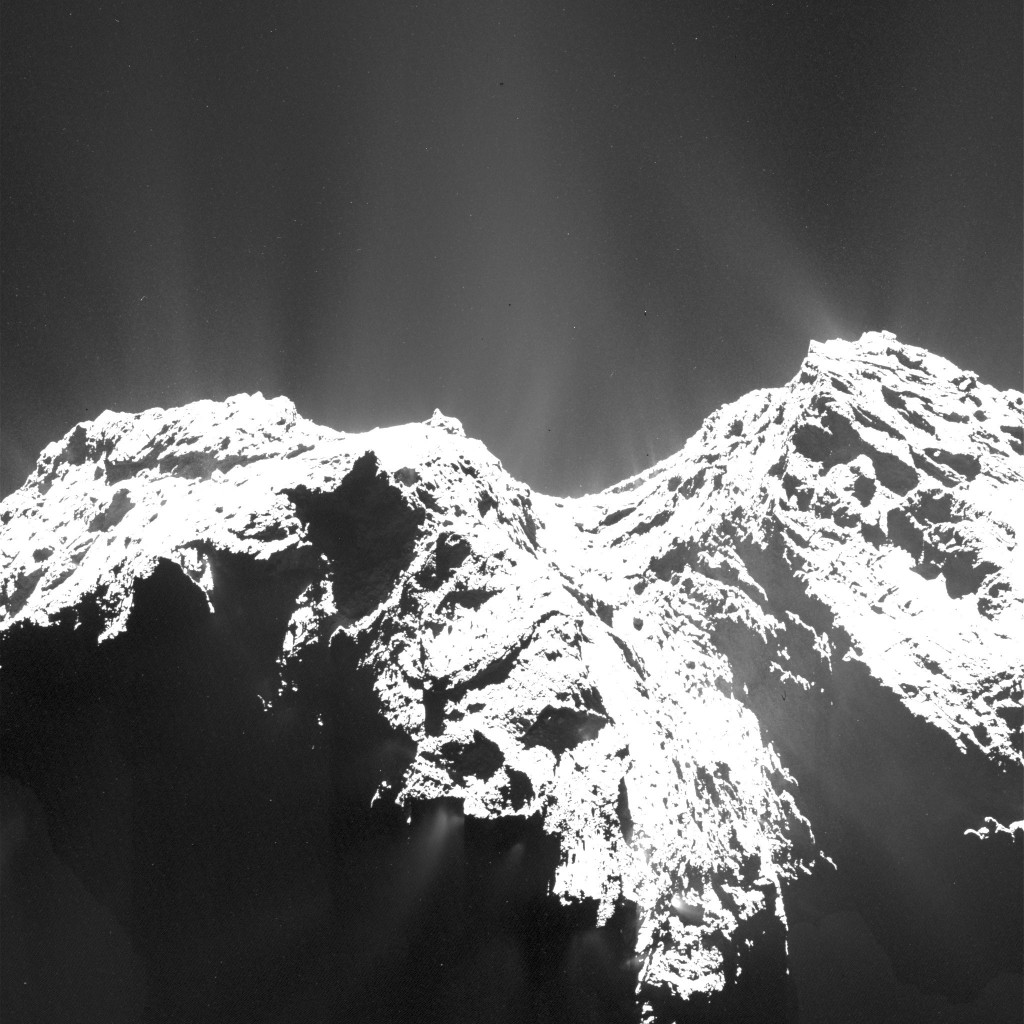 Check out the European Space Agency’s site for amazing pictures and details on comet 67P (Churyumov-Gerasimenko) that their probe Rosetta has been flying in formation with for the last year.