In the first blog on finding exoplanets I discussed the transit technique that is used to find planets by the light they block as they pass in between their star and the Earth. That gives information on the size of the planet, its orbit as well as information on the atmosphere of planet if it has one. But, there is a critical piece of information that is not supplied by the transit technique and that is the mass of the planet. Finding the mass of the exoplanet is done by measuring its radial velocity – its velocity as it moves toward and away from us as the planet or planets pull on it while orbiting the star.

Theoretically, one could measure a star’s motion relative to stars more distant as a planet tugs it one way or another, but in practice it is extremely difficult to measure this tiny displacement. This is the branch of astronomy known as astrometry. This technique has has not had much success due to limitations in the optics used in the telescopes and atmospheric turbulence. The more distant the star of interest is, the more imprecise the measurements become.

To use this technique the light from the star is broken into its constituent parts by using a spectrograph and the shift of the spectrum can be measured with great precision as the star moves, allowing astronomers to calculate the minimum mass of the planet(s) that orbit the star.

In the image above, one can see the star moving around a center of mass determined by the mass of the star and the planets orbiting it. The spectrum shows black lines which are created by elements in the star’s atmosphere that characteristically absorb electromagnetic energy—light—at different frequencies. These lines are used to determine the composition of the star’s atmosphere, but it is the displacement of these lines that astronomers measure to determine the radial velocity and then the minimum mass of the planet. The last image in the graphic shows the absorption lines as they shift toward the red and blue ends of the spectrum.

Note the emphasis on the minimum mass.  This is the mass calculated by the component of the star’s velocity that is directly toward/away from us — its radial velocity.  If the orbital plane of the planet is not directly in our line of sight (i.e. its orbit is inclined at some angle) then we are not seeing the total velocity of the star due to the planet, only a component of it (Remember your vectors!).  If we don’t know the orbital inclination of the exoplanet to its star, then the mass we calculate based on the radial velocity we measure is a minimum mass and could be higher.  If it turns out that the planet is orbiting in a plane directly in our line of sight, then the mass measured would be the actual mass.

One of the most precise spectrographs in use today is the HARPS (High Accuracy Radial velocity Planet Searcher) spectrograph, located at the European Southern Observatory’s (ESO) La Silla facility in Chile. This spectrograph was instrumental in the latest release from ESO “Many Billions of Rocky Planets in the Habitable Zones around Red Dwarfs in the Milky Way.”

HARPS can resolve radial velocities to 1 meter per second. That translates to a star moving toward or away from us at a velocity of 3.6 km/hour, or 2.2 mph—that’s average walking speed for humans! To get an appreciation for these numbers, consider if we were looking at our Sun from a distant star using the HARPS spectrograph.  We would easily be able to detect Jupiter’s influence on the Sun, which provides a radial velocity of 12.7 m/s. Earth, however, would not be detectable because it only disturbs the Sun on the order of .1 m/s.  But, it is not just the size of the planet that determines how much it will affect the radial velocity of the star but also its distance from the star.

Having a value for the mass of an exoplanet allows astronomers to determine the planet’s density and determine its probable composition. Having an educated guess at the planet’s make-up and knowing its distance from its star, and therefore its likely surface temperature, one can then speculate as to the state of water on the planet if present and the likelihood of life as we know it. 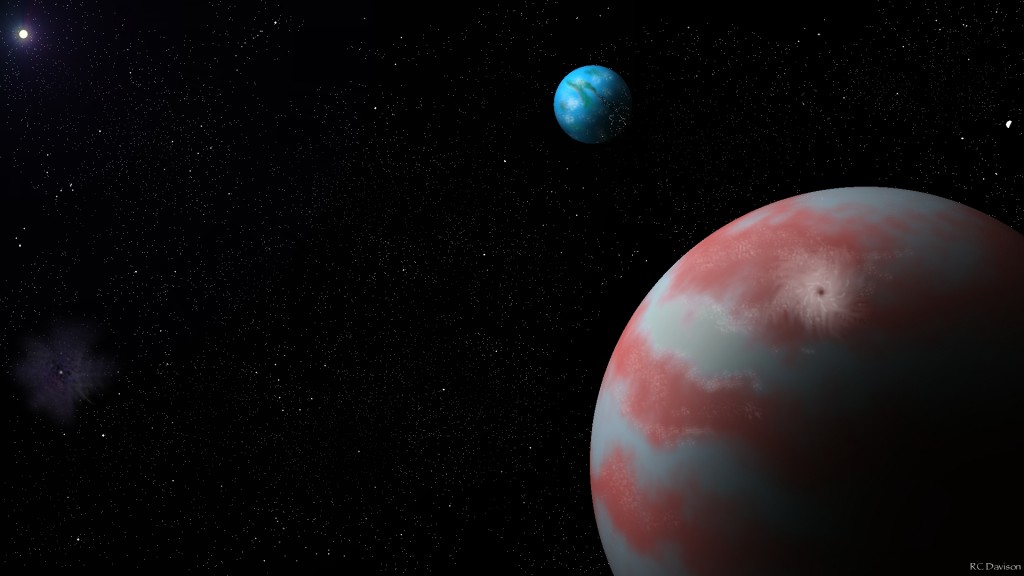 Extraterrestrial civilization on a moon of a gas giant in a distant solar system. -RC Davison

1 thought on “Finding Exoplanets – Part 2: It’s All About the Mass”