The Cassini spacecraft has been orbiting Saturn since June 30, 2004 and has returned many amazing images of this majestic planet. On July 19, 2013 Cassini took a series of images over a period of more than four hours that resulted in the image you see here. (Click on the picture for a larger image.)

The planet is back-lit by the Sun and shows off its spectacular ring system in great detail. From the finely etched inner rings to the diaphanous outer “E” ring, which is created by the ice geysers on Saturn’s moon Enceladus. Enceladus can be seen as the bright dot embedded in the ring on the left side of the image. This ring system spans 404,880 miles (651,591 kilometers). Consider that the average distance between the Earth and our Moon is about 239,000 miles (384,000 km), one can see how our system would fit nicely within Saturn’s rings.

This image is even more remarkable because of the other celestial objects that are also present. Our home planet lies to the lower right of Saturn, while Mars and Venus are above and to the left. There are also seven Saturnian moons visible in the picture. Follow this link for a larger annotated image that highlights these objects.

This isn’t the first time Earth has been photographed from Saturn or even further from home. Check out the blog post “The Pale Blue Dot” if you would like to read more.

One last spectacular image of Saturn, which can be seen below was taken on October 10, 2013. Here, Cassini is flying over the top of the planet and the amazing hexagonally shaped weather system is in full view. If you zoom in to the image you can see numerous smaller cyclonic storms and circular weather patterns near the pole. (Click on the picture for a larger image.) 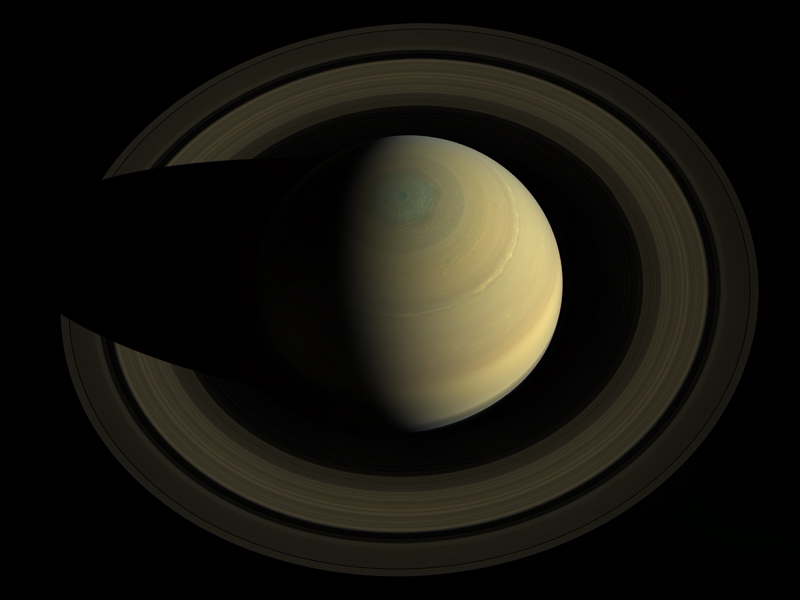 Saturn from above. October 2013. Image Courtesy of NASA/JPL

These are only a few representations of this beautiful planet that can be found at NASA’s JPL website. For a more detailed discussion of how the latest image of Saturn was taken and processed, check out CICLOPS (Cassini Imaging Central Laboratory Operations)  “The Day the Earth Smiled”.

The amazing success of the mission, and the wealth of knowledge that Cassini has brought to us about this planet makes me wish that NASA had the foresight to launch similar probes to Jupiter, Uranus and Neptune. Imagine the wonders we would have discovered!

Lastly, Carl Sagan tried to put our fragile existence into perspective when he lobbied NASA to take the first image of our planet from the distant reaches of our Solar System – the original “Pale Blue Dot” image in 1990. For me, it’s hard to look at our planet as a few pixels in the vast blackness of the cosmos and not be reminded of the stark reality that this is the only home mankind has had—and will have—for many, many generations to come. We can’t afford to waste it.