On February 26, 2014 NASA announced that the Kepler Space Telescope had found 715 new planets. This is 715 verified planets, not planet candidates, as has been released in the past. This brings the total of verified planets to almost 1700, while the number of planetary candidates is over 3800. These planets orbit around 305 stars and are all multi-planet solar systems.

This is significant because the techniques established to verify these planets bypassed the process where other ground/space based observatories would observe the stars associated with planetary candidates to independently verify the presence of orbiting planets. This was done by measuring the transits of the planets or the star’s “wobble” as the planets tug on the star during their orbit. (For more information on these techniques, see the blogs Finding Exoplanets Part 1: The Transit Method and Part 2 – It’s All About the Mass).

So what did the wizards behind the Kepler telescope come up with to speed up the process? Well, they present an amusing and unique analogy that works quite well when you understand the entire picture. Quoting from their press release*:

“This method can be likened to the behavior we know of lions and lionesses. In our imaginary savannah, the lions are the Kepler stars and the lionesses are the planet candidates. The lionesses would sometimes be observed grouped together whereas lions tend to roam on their own. If you see two lions it could be a lion and a lioness or it could be two lions. But if more than two large felines are gathered, then it is very likely to be a lion and his pride. Thus, through multiplicity the lioness can be reliably identified in much the same way multiple planet candidates can be found around the same star.”

So, if you observe a star and you see evidence of transits—multiple transits—you are very sure that you have a multi-planet solar system; its not random noise. This is because the other sources of error: electrical noise in the detectors, eclipsing binary stars (of which 2165 have been discovered at the time of this article), background eclipsing binary stars or optical ghosting tend to lead to single transit-like events, which would cause confusion in identifying a single planet orbiting the star. This ability to filter out the random noise that might obscure the data leads to a confidence rate of better than 99% for these 715 planets. This conclusion was arrived at after careful statistical analysis of 340 planetary systems, taking into consideration false alarms, false positives and noise in the data. (Check out the references below for links to the papers presented on this technique.)

Within this collection of planets we have four that orbit in the habitable zone of their parent star (meaning liquid water could exist on their surfaces) and are less than 2.5 times the size of Earth. An important thing to keep in mind is that these results come from only the first two years of Kepler data. There is over another year’s worth of data yet to be released on Kepler’s discoveries.

Unfortunately, Kepler ended its planet hunting mission last year due to failures of two reaction wheel controllers (out of 4 total, one being a backup) that are used to precisely point the telescope. Kepler served its main mission and was given an extension to keep planet hunting, but that ended in the spring of 2013 with the failure of the second reaction wheel. It’s interesting to note that having only two reaction wheels prevented Kepler from counteracting the force being placed on it by the Sun’s light pressure, causing it to be unable to lock onto the star it was observing. But, Kepler is not down and out yet as there is a proposal—K2—which will allow the spacecraft to continue its planet hunting to a degree as well as observe star clusters, active galaxies and supernovae.

More planets, more possibilities of life elsewhere in the Universe—as we know it or not! Can’t wait for the James Webb Space Telescope to get into space and come online. The better we can see, the more we can see!

I’ll leave you with a new wallpaper—Change of Season. It’s not too hard to imagine an extraterrestrial planet in some distant star system, with the right geological evolution and astronomical orientation, that its inhabitants have built their own version of Stonehenge to mark the change of seasons. 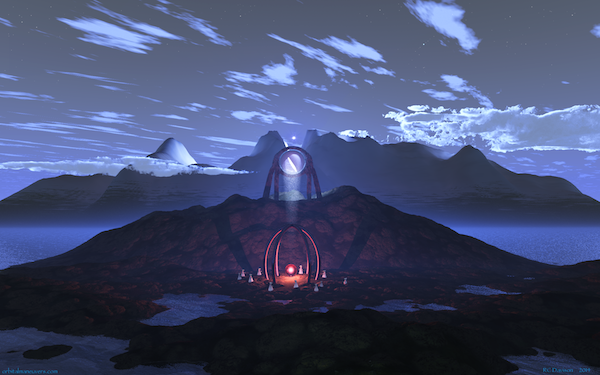 *Kepler Press Release: For more information, images and video about this topic