The cosmos holds many wondrous things to capture our attention, but to me, the site of a globular cluster is just mesmerizing. These bejeweled orbs can contain tens of thousands to millions of stars in a sphere that can be about 100 light-years (ly) across. (Compare this with our Milky Way spiral galaxy that is approximately 100,000 ly across and contains on the order of 300 billion stars.) There are close to 150 globular clusters orbiting our galaxy, which is not unique; other galaxies have thousands or more in orbit about them. 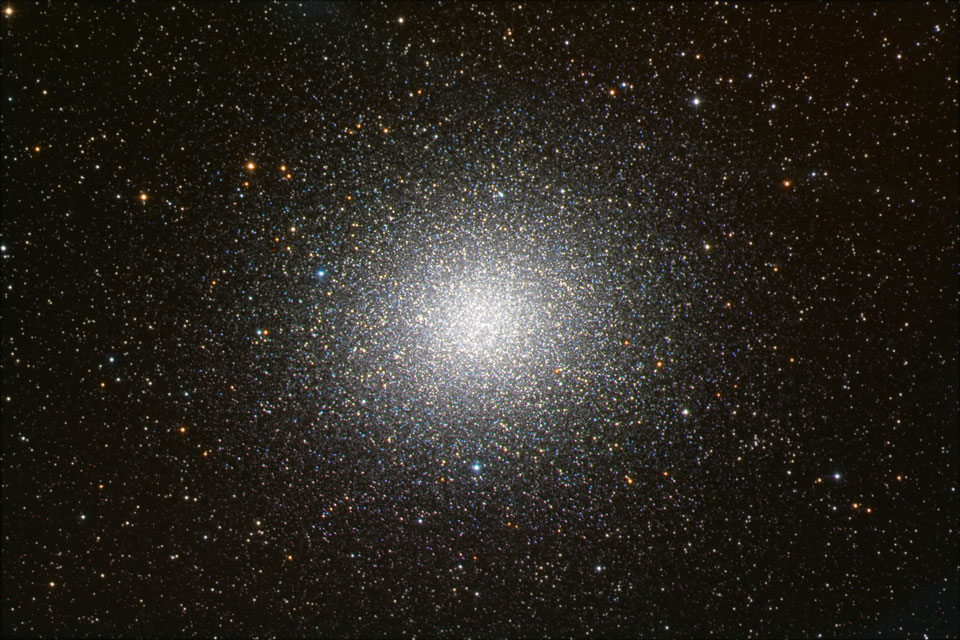 The globular cluster Omega Centauri, visible from the Southern Hemisphere

Globular clusters are made up of very old stars, on the order of 10-13 billion years old. Note that the current estimate for the age of the Universe is about 13.8 billion years old, so these stars are ancient, especially when you compare them to our Sun, which is around 4.5 billion years old. The stars that comprise a cluster are typically smaller, cooler dwarf stars designated as M-class that burn their fuel very slowly giving them their longer lifetime. The larger, hotter stars burned themselves out long ago in brilliant supernovae, peppering the cluster with heavier elements necessary for rocky planet formation. Because these stars are so old, planets that may form in their habitable zones have a greater chance of developing life. But, being in a globular cluster brings its own hazards, which would be a detriment to the evolution of advanced life.  Check out the article by astronomers William Harris and Jeremy Webb, “Life Inside a Globular Cluster“, which discusses some of the potential hazards of living in a globular cluster. (The link will download a pdf of the article.)

The very nature of the cluster, with its large number of stars so close together presents the opportunity for neighboring stars to disrupt the formation of planets or even steal planets from each other. Planets may also be ejected from a stable system by the gravitational influence of a passing star and follow their own path through the cluster. This is not to say that there would not be planets in stable orbits around stars in the cluster, although to date, no planets have been located in a globular cluster. The cluster itself makes it very difficult for us to detect planets orbiting its stars. Take a look at a previous post “Stars in Motion” which has a video showing the somewhat chaotic motion of stars in a globular cluster. It’s not the well ordered system one might intuitively expect from a gigantic ball of stars.

To get a perspective on how dense a cluster is, consider that our nearest star, Proxima Centauri, which is 4.2 ly from us. If you were to map out a sphere at the center of a globular cluster with a radius of 4.2 ly it would contain on the order of 10,000 stars instead of two! These stars would be less than a light-year apart.

A paper was recently published, “Globular Clusters as Cradles of Live and Advanced Civilizations” by Dr. R. DiStefano et al, which discusses the possibilities of planets forming around stars in a globular cluster and surviving long enough for life to form and flourish. But, this is conditional on the planets forming around stars that are located in a “sweet spot” in the cluster; that is, far enough apart that they don’t interfere with each other. Planets that form in the habitable zones of these cooler stars would be less prone to having their orbits disrupted by a passing star because these zones are close to these less massive, cooler stars. 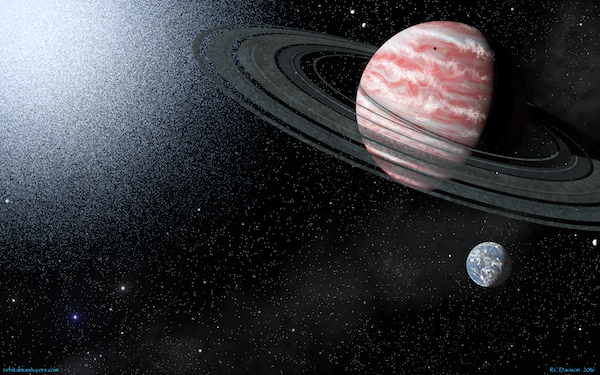 Ringed gas giant with habitable moon on the periphery of a globular cluster. (Click for a larger image.)

A benefit of the stars being in such close proximity is that it makes the possibility of traveling to or communicating with another civilization so much more practical and if advanced life formed, probable.  Also, the high concentration of stars means that planets that have been ejected and not captured by another star may still receive enough light continue to nurture life, especially if the planets retain or generate enough heat to keep water liquid, even if under a layer of ice.

All of this makes me wonder what it would be like to view the cosmos from inside a cluster or just outside of a cluster. The image below represents a possible view of a planet inside the cluster, some distance from the center. The ambient light from all the stars would make nighttime about as bright as dusk/dawn on our planet. Consequently, the beings populating this planet might have a great understanding of the stars around them, but their view of the universe outside of the cluster would be greatly hampered by this collection of stars. 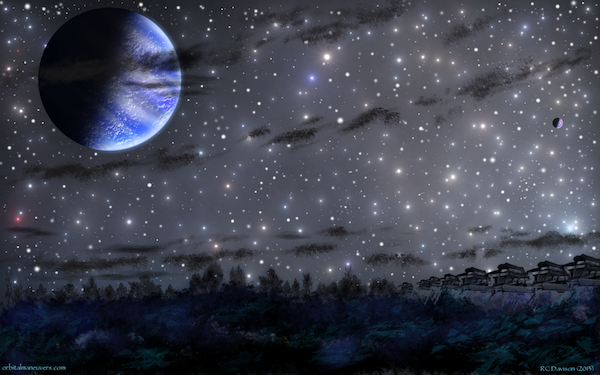 View from inside a globular cluster. (Click for a larger image.)

Check out the very interesting short story by Issac Asimov, “Nightfall”, which is about a civilization that evolved in a globular cluster on a planet with the six suns. They experience constant daylight except once every two thousand and forty-nine years when five of the stars align on one side of the planet and the sixth is eclipsed by a moon unveiling nighttime and all the wonders of the night sky, which they are very unprepared for.

Whether globular clusters are abodes for life or not will not be answered soon. It’s just one more challenge for astronomers to unravel as they sharpen their skills in exploring our amazing cosmos.