“Orb” evolved while while watching a presidential debate.  I think I was looking for a planet to escape to, but unfortunately the planet I created doesn’t really appear to be too hospitable to us humans.  (After the debate I think I was wiling to take a chance on it!) 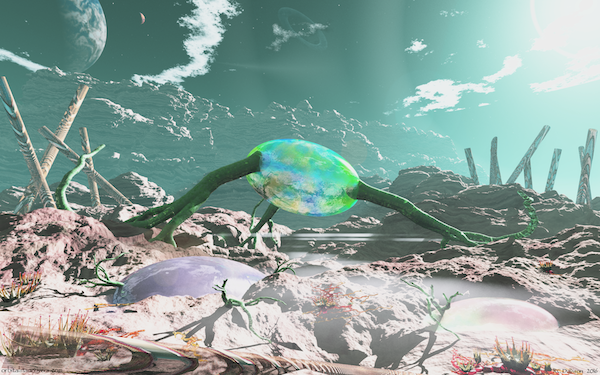 Our world, from its sapphire blue oceans to its emerald green forests, provides everything we need to exist.  Surely there are planets in this vast Universe–in our galaxy alone–that provide nurturing environments to their indigenous species. The resultant lifeforms may be so alien in nature to us that we may never find a common reference point to share our experiences.

We can’t communicate with the other intelligent species on this planet, so communicating with an alien race from another planet may be quite a challenge.  Although, one could reason that the aliens would be as motivated to establish communication as we would be.  One could also argue that dolphins and chimps (among other intelligent animals) don’t have anything to say to us.

A new wallpaper exploring the view of the world from a bird’s perspective. 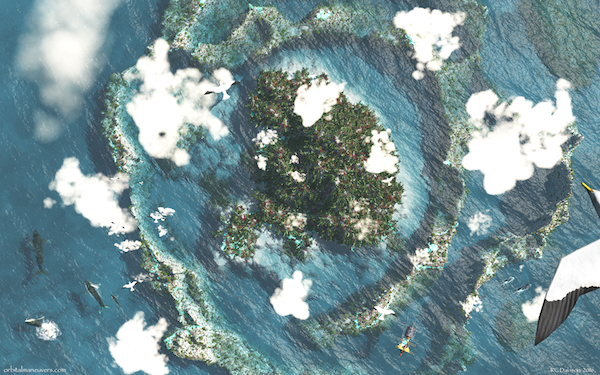 Check out other free wallpapers at: http://www.orbitalmaneuvers.com/Wallpapers.html

The sky is alive with colors all during the day and the clouds that decorate the sky just make it more interesting.

Typically we think of red with a sunset, but it depends on just when you see it and other factors like the amount of dust and smog in the atmosphere as well as clouds.  This picture was inspired by a beautiful picture taken by P-M Hedén and can be seen, along with other beautiful images at Clearskies in the Noctilucent Clouds Gallery. (Noctilucent clouds are clouds at very high altitude made of ice crystals that can be seen late into the twilight hours.) 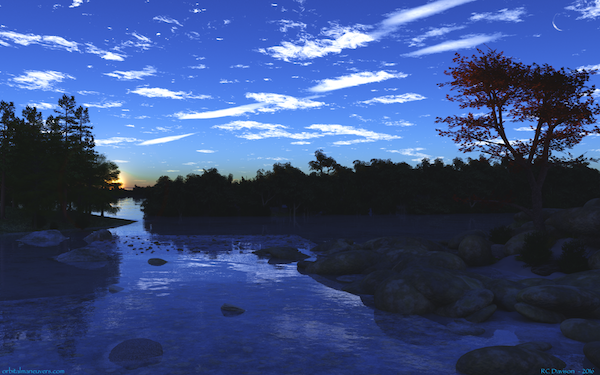 As usual, you can check out  more wallpapers at the gallery page.

“Exoplanet”, the latest wallpaper to be added to the gallery on the website depicts a binary planetary system around a distant star hosting a living ecosystem.  This image has taken forever to produce thanks to some quirks with the Vue-Esprit software that was used to create it.  Hope you enjoy it! 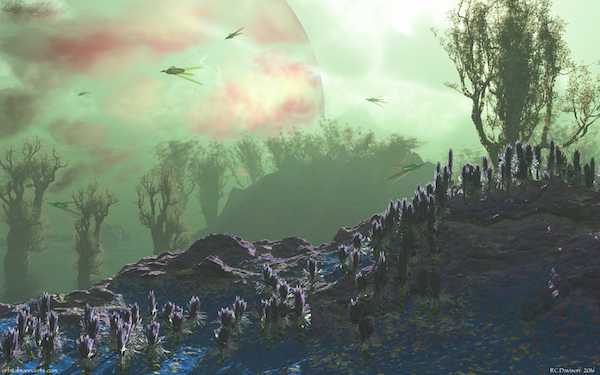 Check out the other Orbital Maneuvers’ wallpapers in the gallery.

A new wallpaper is up called “Troubled Waters” is available on the wallpaper page.  The planet Earth will outlast us all, it is we that swim in troubled waters. The only place in the cosmos that we know is hospitable to human life; we should be more careful in how we treat it and its inhabitants. 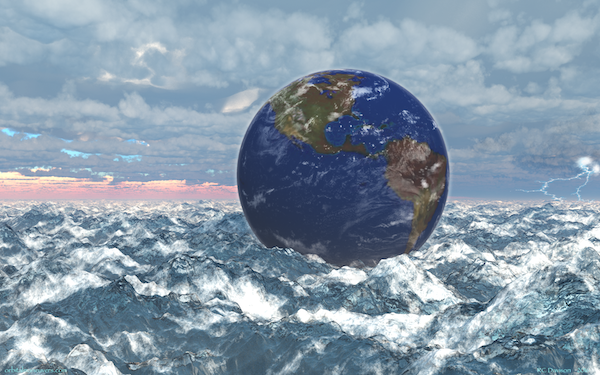 Check out the latest wallpaper, Water Hole, now up on the website.

Stop by the gallery and browse the other wallpapers that are available.

Most wallpapers evolve from an idea, or something I’ve seen during my daily journey through life.  Starry Night actually started out as a desert scene and ended up with water and a whole lot of suns in the sky. 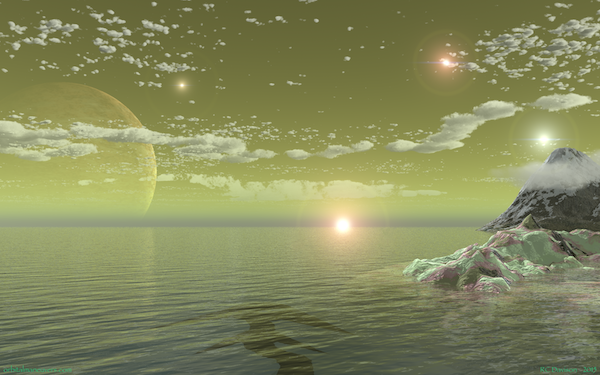 The vast majority of stars in the Universe are made up of red dwarf stars or class M stars.  They are smaller and cooler than our Sun and because of the fact that they are dimmer and cooler, they consume their hydrogen fuel at a much lower rate.  This means that these stars are very long lived – on the order of 10 trillion years, as compared to our Sun, which will be around for about 10 billion years.

Red dwarfs typically exist as solitary stars, but stars that are brighter than the red dwarfs tend to be found more commonly in binary configurations.  A binary star system has two stars that orbit around a common center of mass.  Stars can also exist in three, four or more configurations, but as you add more stars to the mix, the more unstable the system becomes.  Planets can form in such multi-stellar systems and several have been uncovered by the Kepler mission.

Starry Night is a multi-stellar system.  The most interesting thing that occurred to me was that the inhabitants on a planet in such a system may never have a night sky with which to peer into the depths of the Universe!  Imagine how much they would never know about the Universe.  And, even more interesting is to consider their response when they manage to rise above their atmosphere and glimpse the cosmos for the first time.

A sunset Inspired by a vacation in the Thousand Islands while staying on Wellesly Island, which overlooks the Lake of the Isles.  A beautiful area to appreciate some of the wonders this planet has to offer. 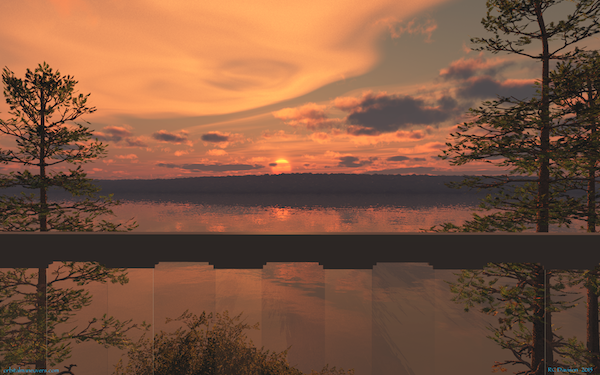 (Check out the other available wallpapers.)

Probably not bipedal, humanoid life with wrinkled foreheads, spotted faces and knobby noses so frequently depicted in modern sci-fi today.  What may be out there is probably more bizarre than we can imagine.  Take a look at what swims in our seas! (And, this is just what we know about.)  Just think about the fact that we — those creatures in the sea and us humans — all evolved on the same planet.  What is life going to be like that evolved on a different planet with different environmental stresses from what our evolutionary history has been? It probably tops anything we can imagine!

Below are two versions of the same scene depicting life on a watery planet, which exists near a sparkling globular cluster and nebula giving birth new stars.  My alien lifeforms are pretty tame, but the focus of the image was the environment and not the lifeforms.  The two versions are basically the same scene but with very different atmospheres and consequentially very different lighting effects.  I put both up for your viewing pleasure because I couldn’t make up my mind which version I liked better!  Let me know which one you prefer. 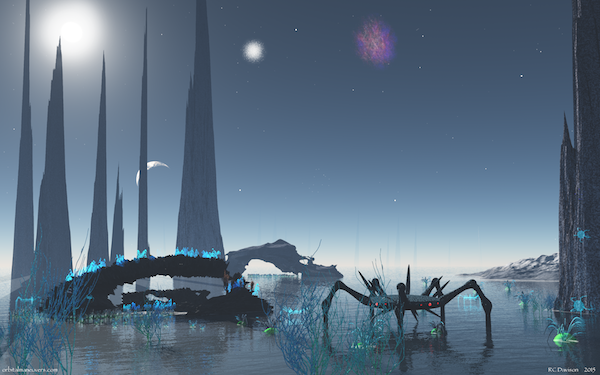 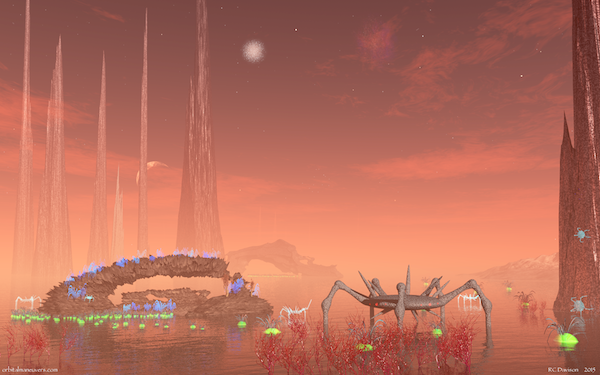 Check out more wallpapers at the Orbital Maneuvers website.

Extraterrestrials, as portrayed by popular media, typically either want to eat our brains or strip the natural resources from our planet.  But, what if we are the technologically advanced civilization visiting a world that is just starting to be explored by its natives.  Will we be intelligent or civilized enough not to interfere with the planet’s inhabitants natural development?

The wallpaper Journey Far depicts explorers on distant planet leaving the shelter of their harbors and homes to discover the wonders their planet holds in store for them. 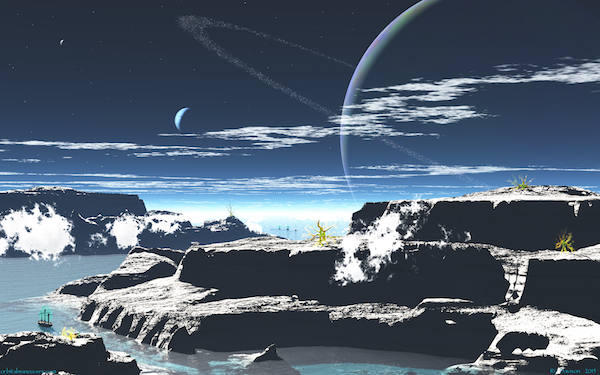